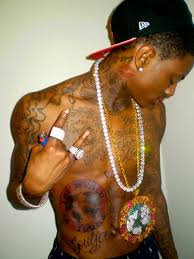 Today it’s Soulja Boy 21th born day. Congratulations young man, you made Pusha T lie ! Since his breaktrough in 2007 (yes I know it seems like ages ago) DeAndre gave us a lot of gems. Here’s a small compilation.

1. The name of his current new mixtape : The Bernard Arnault EP

3. He slept with Kat Stacks (a disgrace for the women of whatever race she is) who accused him of doing coke. Then he still said that he LOVED her and got heated when Fabolous made jokes on Twitter about that situation. #SensitiveBoySwag

4. He shots a remake of the movie « Juice » ! He plays the role of “Bishop” which was originally played by the late 2 Pac. He also wants to play in the upcoming Tupac biopic.

“The labels out here, they don’t know what they’re doing. No disrespect to no labels, but I’ve got my ear to the streets. I know what’s hot and I know what’s going to sell, but nine times out of ten you’ve got to bring that to the label, and you’ve got to tell them. »

“I really didn’t want nobody to know that I shot somebody” . “My label [didn’t] want that out there [because] when the robbery went down I had fans like 9, 10 years old. But being that I’m 20, I don’t give a fuck no more. Ain’t nobody take shit [from me that night].”

9. When asked on the Red Carpet of the BET Awards what historical figures he hated the most. : « Oh wait! Hold up! Shout out to the slave masters! Without them we’d still be in Africa. We wouldn’t be here to get this ice and tattoos. »

10. Trying ( a bit too hard)  to sound like Gucci Mane  or Wiz Khalifa