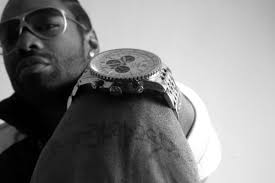 He helped Lil Wayne sell a million copies of « Tha Carter III  » by producing his chart-topping smash “A Milli,” but the royalty checks never came in.   So Mr Bangladesh has been very vocal about « the situation » (= lack of payment and communication)  between him and Cash Money.  Last year , a few months before the release of « 6’7 » » Mr Bang was in Paris. He gave me his point of view on Wayne’s evolution on the mic  and where he stand with Cash Money.