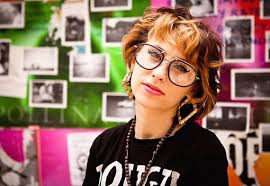 Over the past several weeks, Oakland newcomer Kreayshawn has been at the center of controversy, after throwing a couple shots  at Rick Ross’ way during a radio freestyle.And it doesn’t stop ! Yesterday (ugly) naked pictures of her leaked  then she went into an altercation with Rick Ross @ The VMA .

When I met her 2 months ago, during her first stay in Paris, she was still the « phenomenon-from-Oakland-with-the-1-million-dollar-deal ». Altough at the end of the interview (when I asked her if she thought it was easier for her to breaktrough as a white MC) you can tell that this 21-year-old young lady is still fragile.

I almost feel bad for her.