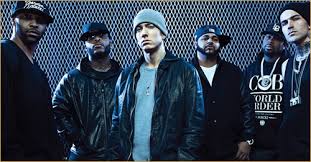 Shady Records 2.0 undisputedly had the best cypher at this year’s BET Hip-Hop Awards. Here’s the video, the lyrics, the original song ( « Tried By 12 » by The East Flatbush Project’s) and the sample.

Sorry Rozay, Chris Breezy  , France’s own Soprano, Skillz etc but Marshall and his boys were the best. My favorites ? Royce  (Imagine if Chris Brown said « Hi Rihanna » !) and Joell.  Joe Budden sounded like a stand up comedian and Crooked + Yelawolf were just ok. Eminem ? Two years ago he was already on « beast mode » . This year he was still nice but what’s up with the crazy lines on Posdnous from De La ?

[Eminem]
Welcome to Detroit
This is the BET Shady 2.0 cypher 2011
Myself, Slaughterhouse and Yelawolf

[Yelawolf]
Put these muthaf-ckas in a box and I send ‘em away
Put em in a grade lac and pop the trunk
Hey throw em in the back, jack hi, dig ‘em a grave
Put a brick inside that Xerox, when I print ‘em a page
Moving keys I cant relate, cause I live in a cage
I throw up the A, I take ‘em to school
I give em a grade
An easy E for effort
Thats WWA, white with an attitude
Alphabet soup is on my plate
All I got is Z’s they sleeping on me, I can’t get ‘em awake
I spoon feed them the sound in a room full of deceivers and clowns
who believe they making it rain cause
All they see is the clouds
And I watch from the couch of the VIP like a potato with a bunch of
meatheads like f-ck it
I just feed em a cow
Plenty of white boys you can pick from this year
But before you can pick a pepper, you better pick up your heater
Cause even Peter Piper could pick up a mic but what its like to pick a
fight with me
It’s like putting Nikes on a cheetah with a speedo or at least in my case Addidas
I’m out this bitch drinking Sprite by the 2 liter
Holla, Shady records

[Joe Budden]
Say I’m from the new school, I’ma say check ya tone and watch ya mouth
If they teaching how to dougie, I’m condoning dropping out
Forced a while ya’ll birthed me and gave me up
I just perfected being hip hops foster child, now check it
I don’t blame y’all for being trash fans and copping it
The radio’s the crime scene the masses are the hostages
In my youth I throw shots, the fan would dodging it
I’m grown, I aint watching the throne, I’m sabotaging it
You see that four headed monster and the storm looms
Snipe ‘em from a distance, the scope got a long zoom
You Super Mario thugs is in the wrong room
Got a figure here you won’t get bigger if you on shrooms
Was left to me I would revive what the game be ’bout
I’da took the wine outta Amy’s house
Enough raps from you scrub cats about cocking a snub back
Wayne couldn’t teach me how to love that
But I got this shit from uptown, she my summer bunny
Both parents broke but she come from money
Think my bread is her paper to burn so I lock her out and now she doubt
David is Stern
She so bad I make her hit the telly from a taxi and dead her in that holiday inn
Learnt that from Max B
Thats why the haters empty condo on a semi lamas
I made it right before the eyes like I was Beni hanas
Is it me, is what I’m hearing this pitiful
Airwaves the same now the stereo’s typical
My skin thick so the critics ignore
So unafraid to die you think I did it before
The boys Rodman with the trash talk
Magic walk with the black ball way I bounce off the asphalt with cat paws
Glass jaw, hoody and mask would be the black with no passport
Body be found in the mansion in one of my trap doors
If punks had awards ya status whore categore
Propbably that, Michael Rappaport and Kenny Lattimore
I know hip hops alive and well
If it died, you other crews wouldn’t survive the smell

[Crooked I]
I spot a victim, the plot’ll thicken when the clock is tickin’
I caught em slippin, I gotta give em a shot, I hit ‘em with proper spittin
Hottest writtens and compositions, so competitions a contradiction
Somebody mentioned they got it crooked, highly fiction, we probably
different, got Gotti henchmen, opposition our body quick as Bugatti engines
I’m on a mission to get rich, the sickest lyric kickin’ diggin a dish for different spittas
We lyricists get disfigured, sip liquor
Spit like a sick mixture
A Notorious Pun and L get the big picture
The poster I’ll roast ya, my mind so deadly its just like the beanie is close to a holster
It’s over control my whole coastal region like I’m supposed ta
Flow is going postal even, open season
Heart close to freezing, ruthless is easy
Approach I’m squeezing, believe me
Dopest west-coaster breathing
So most ya’ll hope I’m vegan, no pun, beefing
Rappers need to keep it trill
Give me a beat to kill too many people still eating sleeping pills
People sleeping on my ether skills
And ya’ll aint even real
You ’bout to die in this cypher before you die you should do the Jada and leave a Will
Foreal

[Joeel Ortiz]
Yaooowa
I aint a rap dude, I’m a dude who rap
Before this I was moving crack
Killers y’all would come when y’all rhyme I salute and dap
And if I blink then remove ya snaps, you aint cool you wack
With ya foolish yac’s? skinny jeans dont mean yo ass shoot
It means ya booty claps
Don’t play like Tyler Perry, this the Slaughterhouse of Pain
Flow brown, tight and heavy
When it comes to sixteen’s I’m a fiend feinding a studio
Near a needle with a mean lean, probably writing bars to Nas ‘Thiefs Theme’
Getting my Yaowa on, may all the Olajuwon’s be the dream team
This is an all day slaughter they feindin for us to break like Beyonce’s water
The four quarters doing all the eating and you gotta know why I made the cut, I’m Puerto Rican
Ortiz keep the fire ready
and tryna put me out’s like tryna steal a transvestite from Eddie

[Royce Da 5’9′]
I’m do or die dope
And you can make the sticker sittin on the door
Of that phantom your suicide note
Hi Rihanna..
Is Nicki living with you? Let me know
So I can buy binoculars and telescopes
Hi Rihanna..
I don’t need to know you better
You tell me you love my music again, we go together
Bye Rihanna..
Now back to y’all fools
We rock out like the outside of a guitar school
Thousand dollar frames, I prefer to see the world through
Don’t ask me nothing bout Budden, I beat my girl too
You ask me why do I keep her? I say it’s cheaper too
That’s why I ride around in a rose like Wiz Khalifa do
Rappers, I’m your daddy, I tell you straight as this
You don’t kill but your father will like jaden smith
I tell ya like I tell my Spanish chick
You fly but I ain’t going down on no landing strip
So get your wax on like Daniel-son
I’m a have to run like De La Hoya in drag when cameras come
Point out the greatest rapper alive I red dot ‘em
Smack his girl on the butt and buy her some red bottom
Bring every deceased rapper back to see his wife
While I’m cyber sexing with Jessica Alba, via skype
I’m on my d-boy, d-bo thing
Spiritual steelo swing like cee-lo green
Get out the camera with yo B Roll bling
You know your flow is whack
We cornered the market like a walmart in a culdesac
Yeah, this what 2 million singles sold and a album that’s gold
Look like, without having to sell your soul
Nickle

You ’bout to see peace destroyed
It’ll never be restored
When I unleash these beastly hoards on your CD stores
Wanna stop it, you gon need a priest and at least three swords
A license to ill from the Beastie Boys, 3 ouija boards
And a squeegee and please be warned don’t ask for the squeegees for
Or the holy water, acid rapper that’ll eat these floors
Eat a hole in the rhyme book, you see these horns?
And as for me, you ask where I’m going, will he be mourned?
Is puke luke warm? Should Casey Anthony do porn?
Can that chick fit a newborn dead baby inside her freakin shoebox
with a shoehorn, smother in chloroform so she can go get her groove on?
Can she duct tape and Velcro a fetus? Joell yo,
Tell Joe I need his empty box from his old shell toe adidas
So I can put these babies in the fetal position, they’re getting elbows to
the penis
Yeah, big deal. I took some little kids big wheel
And spit in his fricken big kids meal
Quit tryna bite me and pinch, you win sit still
You just put your six inch heel through my Benz windshield?
Is it dust we bout to kick up?
Can Yelawolf fit a fifth of rum in a big cup?
Between a stick shift in his fricken pick up
And drink like a hick, redneck, hillbilly will till he gets hiccups?
Flippin the script up like Mike Vick
Get bit in his junk by a pit, yup I’m a sick pup
I’d be a horrible magician
Cause I’d f*ck that trick up
Fix ya lips up to say something fly, or zip up
A-B? Let’s C. You said you were gonna do X-Y-Z
Till you f*ck around and get dropped like an E
When you add an I-N-G
Don’t put a K in front of that though, When I MC
Cause I’m not the king of this microphone booth
It’s more like a phonebooth
Superman in this bitch, kryptonite won’t do
It gives me more power, I bump the fat boys and
Eat rat poison, and take meteor showers
Fresh outta the mental hospital and me not flossing a middle finger
While I hop in a mosh pit, will be like Nas doing gospel or R&B, you crazy?
Me pushing up daisies, that thought is impossible
Is it flashing across the news, Posdnuos was caught with a prostitute
With a huge Johnson, boobs, and a monstrous tube of lube
And a bra, some boots, some panties, and an aqua blue Mazda
Swallowing a popsicle, playing tonsil pool
So kill the rumors it ain’t happenin
I’m a rap till I’m fossil fuel